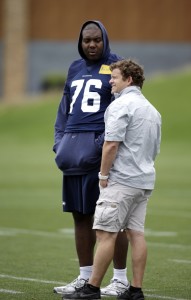 The Seahawks went 3-3 with their top free agents in the first two days of free agency, and Russell Okung will be the tiebreaker — perhaps on Day 3.

The Hawks gave very good deals to Jeremy Lane ($23 million over four years) and Jermaine Kearse ($13.5 million over three years), which is in line with reports that the Hawks have made competitive offers to their free agents (Bruce Irvin and Brandon Mebane being exceptions). J.R. Sweezy, who signed for $6.5 million a year, said they were in the running, and Seattle reportedly has made a “strong” offer to Okung.

Of course, it might not be strong enough. Okung is off to visit the New York Giants and Detroit Lions. The Giants have spent heavily this week and still have around $20 million in salary cap space left. Detroit has $25 million (numbers via OTC).

The San Francisco 49ers also reportedly are interested, which would seem to indicate they are ready to move on from Joe Staley.

Mark Dominik, a former GM, says Okung has suffered from not having an agent and would have had a deal already if he had one. But it’s more complicated than that, since he is coming off a shoulder injury and won’t be ready for field work until June. Jermon Bushrod, 31, settled for a one-year deal with Miami as he comes back from his own shoulder injury.

The big question for the 28-year-old Okung: Will any team offer a multi-year deal at $9 million or more? If not, he likely comes back to Seattle for one year.

The Seahawks on Thursday began looking around for line depth, looking at second-tier free agents from Arizona: Ted Larsen and Bradley Sowell. Larsen, a 29-year-old interior lineman with 57 starts, met with the 49ers. Sowell, 26, is strictly a backup tackle.

If Okung signs with the Giants or Lions (or 49ers), Seattle’s LT drama could go on for a bit as the Hawks wait for other teams to make moves. The Jets are hosting Pittsburgh LT Kelvin Beachum on Friday, according to John Clayton, who speculates that Beachum signing could result in the release of longtime LT stalwart D’Brickashaw Ferguson.
Meanwhile, the Hawks are looking at veteran DTs to replace Mebane. Cedric Thornton signed with Dallas, but Cam Thomas (Pittsburgh) apparently is headed to Seattle for a visit. At 6-4, 335 pounds, he appears to be their kind of run stopper.
Veteran Paul Soliai also could be an option, Clayton reported. The 32-year-old was cut by Atlanta on Wednesday.

The Seahawks also continue to look to the past for replacements for Irvin. O’Brien Schofield joins Chris Clemons as former Hawks on Seattle’s radar. Schofield, who started 10 games for Atlanta last season, reportedly has interest from Miami and Dallas, too.