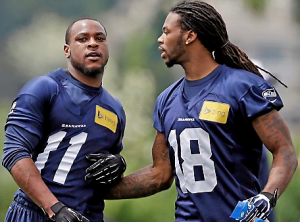 Now you know why John Schneider doesn’t pay big money in free agency very
often: It usually
isn’t worth it.

The release of Cary Williams this week was the latest example. It was the second straight year the Seahawks have gotten rid of a highly paid veteran addition during the season — and they probably set a record with this one, dumping Williams just 12 games into a three-year, $18 million contract.

A year ago, the Seahawks traded Percy Harvin — the pouting malcontent who for a time had poisoned the Seattle locker room.

Since he took over in 2010, Schneider has acquired nine big-contract veterans — defined as making $5 million a year or more — and six of them have not been worth it. 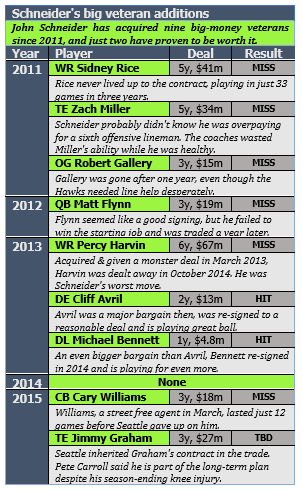 Sidney Rice was an injury gamble who predictably did not last. Robert Gallery, Matt Flynn and Williams were “need” moves that were total flops. Zach Miller and Harvin were luxury additions who were not worth the money.

Schneider has spent big on six offensive and three defensive players, and none of the offensive players has been worth it (Jimmy Graham was off to a good start before being lost for the season).

Only Cliff Avril and Michael Bennett, Schneider’s surprise bargain signings in 2013, have worked out.

In 2011, after the Hawks had already assembled the core of their defense — Brandon Mebane, Red Bryant, Chris Clemons, Earl Thomas, Kam Chancellor, Richard Sherman, Brandon Browner, K.J. Wright — they decided to use some of their significant cap space to go big on offense in free agency.

They foolishly paid the injury-prone Rice $8 million a year and then surprisingly gave Miller nearly $7 million a year. They also signed Gallery, the former No. 2 overall pick, for $5 million a year as they desperately sought to fix their offensive line.

None of those guys proved to be worth that money. Rice couldn’t stay healthy and retired at age 28, Miller was an overpaid sixth lineman for three years before his body wore down in 2014, and Gallery was cut after one year and then retired.

In 2012, the Seahawks were desperately trying to upgrade at quarterback after learning the severe limitations of Tarvaris Jackson and Charlie Whitehurst in 2011. After an embarrassing attempt to lure Peyton Manning on the tarmac in Denver, Schneider and Pete Carroll ended up adding Flynn at over $6 million a year. But Flynn lost a QB battle to rookie Russell Wilson and was traded the next year. The signing was a good idea, based on need and availability, but Flynn just got aced out by a much more dynamic player.

After Wilson nearly rallied the Seahawks into the NFC title game as a rookie, Schneider tried to put the Hawks over the top in 2013. In the first three days of free agency, he acquired Harvin and signed Avril and Bennett — a stunning haul of veteran talent that seemed destined to help an already excellent Seattle team win the Super Bowl. That is exactly how it played out, too, even though an injured Harvin had almost nothing to do with it.

Avril and Bennett have proven to be Schneider’s best free-agent additions, helping Seattle to back-to-back Super Bowls and playing at a Pro Bowl level — among Seattle’s top three defenders — this season. Schneider deserves major kudos for recruiting and then keeping the star defensive linemen.

But the GM deserves just as much ridicule for acquiring Harvin, who quickly wore out his welcome, wore down team morale and was gone by last October — going down as Schneider’s worst personnel move.

Schneider quickly bounced back from that debacle by using some of the open cap space to retain Avril and Wright late last season. It continued the 2014 trend of keeping the core together: Schneider already had re-signed Bennett, Thomas, Sherman, Tony McDaniel, Steven Hauschka and Doug Baldwin.

After last season, the Seahawks needed two positions above all else: cornerback and tight end. Feeling desperate to bolster a cornerback position that had been decimated by injuries, Schneider brought in Williams, who had been released by the Philadelphia Eagles (who replaced him with Seattle’s Byron Maxwell).

Williams never really fit into their scheme and is now gone — a waste of $7 million that also cost them McDaniel, who had to be released after Seattle signed Bobby Wagner to his $43 million extension in early August.

Schneider also made the stunning blockbuster deal to add Graham — another luxury addition. Graham was on pace to set team tight end records before he suffered a torn patellar tendon in Week 12. Carroll fully expects him to be a big part of the offense next year and beyond, so there certainly is hope that he will not become the latest highly paid veteran bust on offense.

Fortunately, Schneider has made a lot of other moves that have helped the Seahawks become and remain a Super Bowl contender. That defense, which has been the best in the NFL over the last three years, is playing like it again — with Avril and Bennett leading a bunch of homegrown Seahawks. And Wilson, Baldwin and rookies Thomas Rawls and Tyler Lockett are leading a suddenly resurgent offense.

The Seahawks are an almost entirely homemade team — just five of the current 22 starters were acquired from other clubs.

In the wake of the Williams release, now you know why.