(UPDATED) The Seahawks are trying to resolve their biggest roster question, but they are still making other free-agent moves.

In addition to the premier pass rusher (or two), they also need a run-stuffing defensive tackle, a cornerback, a running back and a backup quarterback. (UPDATE: They acquired CB Quinton Dunbar from Washington on Monday.)

Let’s take stock of each position:

QUARTERBACK
Latest news: The Seahawks reportedly were interested in P.J. Walker, who was the best QB in the XFL until it was canceled by the pandemic. He signed with Carolina though.
Move to watch: The Hawks will end up with a minimum-salary guy, whether it’s bringing back Geno Smith or adding another clipboard holder. It’s low priority. Last year, Smith was not signed until May (though the Hawks added Paxton Lynch in January).

RUNNING BACK
Latest news: The Hawks have their eyes open for a veteran to join Travis Homer while Chris Carson and Rashaad Penny recover from injuries. Isaiah Crowell is one guy they reportedly have shown interest in. … Meanwhile, Carson has seen the devaluation of RBs in free agency and knows he won’t get more than $6 million to $8 million next year, if he stays healthy and earns it.
Moves to watch: A reserve will be pretty cheap, and it wouldn’t be a surprise if Seattle drafted a guy — especially with Carson entering the final year of his deal and Penny having a tough first two years. … Nick Bellore seems an easy cut to save $1 million.

WIDE RECEIVER
Latest news (updated): The Hawks tendered David Moore for $2.13 million and signed former first-rounder Phillip Dorsett. … The Hawks were speculated to be interested in Minnesota’s Stefon Diggs, but the price was very high: He was sent to Buffalo for a first-rounder and three other picks.
Moves to watch: With Dorsett added, Moore probably will be asked to reduce his salary. … The team probably will take advantage of a historic draft class to add a potential third guy behind Tyler Lockett and D.K. Metcalf.

TIGHT END
Latest news: The Seahawks have loaded up here, adding Greg Olsen for $7 million, re-signing Luke Willson and tendering Jacob Hollister for $3.26 million. … They also brought in oft-concussed Jordan Reed for a visit before the pandemic lockdown.
Moves to watch: All eyes are on Will Dissly’s recovery from a torn patellar tendon. If he is ready for the season, Willson probably won’t make the team — unless Pete Carroll is thinking of keeping four this year. … Ed Dickson will be cut at some point, returning $3 million in cap space.

OFFENSIVE LINE
Latest news: The Hawks have remade their line, adding B.J. Finney and Brandon Shell on two-year deals and Cedric Ogbuehi for 2020. Plus, they took a flyer on former top-10 pick Chance Warmack. … Joey Hunt also was tendered for $2.13 million. … George Fant got $9 million a year from Shell’s former team, the Jets, and Germain Ifedi is not expected back either.
Moves to watch: The additions seem to point to the eventual release of Justin Britt, which would return $8.5 million in cap space. … The projected line sure looks to be (L-R) Duane Brown, Jamarco Jones, Finney, D.J. Fluker and Shell — with Ogbuehi playing Fant’s old role as sixth man/swing tackle. … Can Ethan Pocic finally prove his worth and bump Hunt as the backup center? Either way, Hunt is unlikely to be paid $2.13 million. … The draft is strong at tackle, and the Hawks should look to add one in the second round.

DEFENSIVE LINE
Latest news: In a bit of a surprise, Jarran Reed is back (for two years, $23 million). And Seattle also reunited with Bruce Irvin and tendered Branden Jackson. … Quinton Jefferson signed with Buffalo for $13.5 million over two years.
Moves to watch: The Seahawks are focused on fixing their biggest hole by signing a premier pass rusher (Clowney or Everson Griffen). They really should add Griffen no matter what, whether they keep Clowney or trade for Yannick Ngakoue; but John Schneider likely will be satisfied with Irvin, Reed and one of the others. … The Hawks need another cheap veteran tackle to go with Reed and Poona Ford, and they could draft one fairly high. … Jackson probably will not stick around at $2.13 million, money that could be used for the tackle.

LINEBACKER
Latest news: Some foolishly thought the Seahawks might cut K.J. Wright, but he remained on the roster as a $1 million bonus was due this weekend.
Moves to watch: Mychal Kendricks (ACL) is not expected back, which means Cody Barton should step into his spot. The Hawks have been looking for nickel backs, so it seems likely they will use a lot less base defense in 2020. … In the draft, they could add a guy on Day 3.

SECONDARY
Latest news (UPDATED): The Seahawks had looked at former Browns T.J. Carrie (who visited) and Damarious Randall, before trading for Washington CB Quinton Dunbar. He figures to push Tre Flowers and possibly work in the slot as well.
Move to watch: The team is shopping Tedric Thompson, who will be cut if not traded (which will return $2.13 million in cap space). The best the Hawks might get for him is a conditional late-round pick. 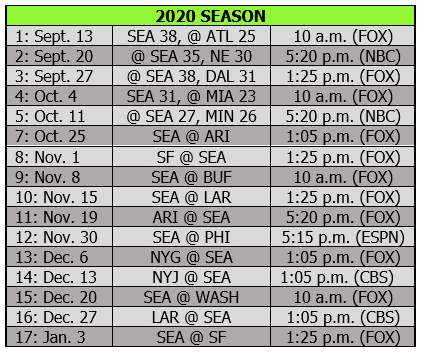